This week we’ve been on holiday. Our first family holiday abroad with the two nippers. Given how we were illness magnets for most of Thomas’s first year, last summer we did a stay-cation. In that we stayed in our own house, took time off work, and did loads of little day trips instead.
But this year we decided to be insane and go to lands foreign, a Eurocamp located in Domaine des Ormes in Brittany. As Eurocamps go it has all the usual stuff. Tents for the younger travelers, little log cabins for the families who like to shit in a small cupboard (our category) and some fancy ass villa style things that are expensive just to look at.

Accommodation aside the site also has some activities that people can partake in and a swimming pool, with a roof so that the gingers don’t immediately catch flames and heat the water for the rest of the swimmers. It was one of the activities that myself and the ladyfriend decided to try out hand at the other evening. See neither of us are ‘sun holiday’ types. As in the sort of person who is happy to go away for a week and literally sit by the pool all day drinking and getting skin cancer. Not that there is anything wrong with that sort of holiday (but seriously, trust me on the sunscreen), it is just we get bored quickly. A day or two of that and we are off looking for villages to explore or old churches to visit. In our younger, non-parent, days we would have even done some of the activities. Such as crazy golf. See I enjoy a bit of friendly competition. Herself, on the other hand, gets a bit competitive. So crazy golf as a family should have been a fine way to pass away some time.
Except we forgot one crucial thing: our kids are bat shit crazy. Do you crazy golf, bro? Because you haven’t crazy golfed until you crazy crazy golf.
We had the little eighteen hole course entirely to ourselves, which is more a win for any of the other guests at the campsite than it is for us. For you see neither of our kids played crazy golf. They played something else, with rules written in Sanskrit on the air between raindrops. Olivia, Thor bless her, decided that hitting the ball into the hole was no fun. However climbing over the obstacles and throwing the ball, full force, at the hole was much more fun. Almost as much fun as taking a swing at her fifteen month-old brother with the stick…because ‘reasons’. When she wasn’t doing either of these activities she was playing her own version of ‘Queen of the Castle’. The castle being the fourteenth hole, where an actual little castle stood but one big enough for a nearly four-year-old girl. From here she declared to the world there were dragons, fairies, pirates, bad guys and fuckers all around the place.

She learned that last one from her mother. I never curse.
Honestly, I rarely fucking swear.
Then we get to Thomas. Hardly a bastion of sanity in this crazy mixed up golf game we were playing, but definitely a lemming to some degree. The way the course was built meant there were two levels to it, with a slope running for about four feet upwards between them. Of course the slope was something you never stepped on, because the course wound around it. But Thomas, Odin bless him, saw the slope as a challenge. A declaration that the world needed him, nay required him, to crawl towards the small fence and duck underneath then full on Superman off the top to race down.
IN THE MIDDLE OF MY BACKSWING!
Luckily I was a few strides away from him and raced over, catching him before screams of pain and injury occurred. My reward? I was marked down by herself on the scorecard because my ball left the hole and Thomas then started screaming because I hadn’t let him injury himself. Fuck my life. 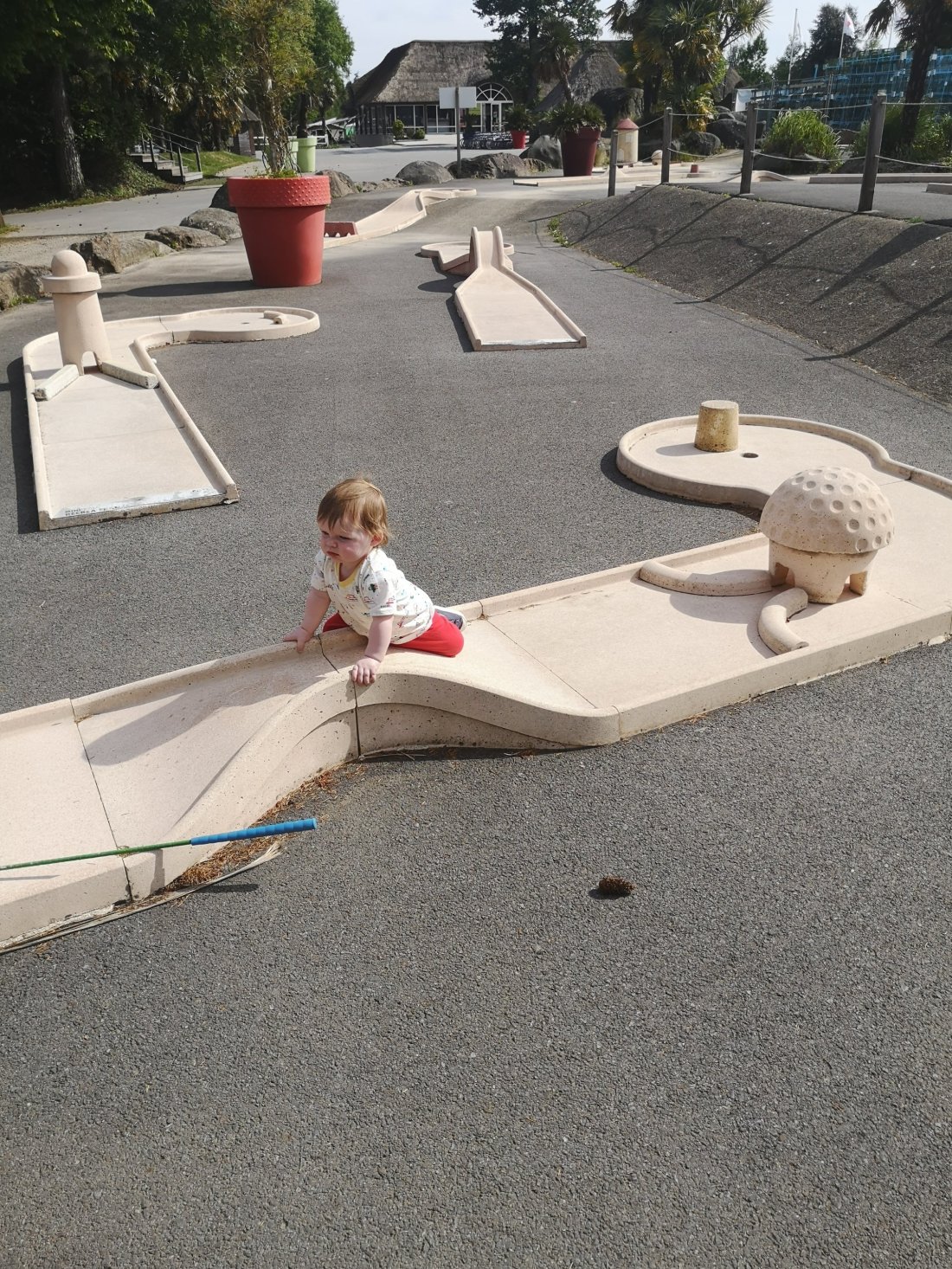 Olivia then, never wanting to feel left out, declared at the fifteenth hole that she was bored. That crazy craze was boring and mummy and daddy should stop and go home.
You bring the little shits away to shores new for a holiday and they can’t let you pretend for thirty minutes that you are still people who do silly things like play crazy golf.
Ingrates.
Of course that would have been the end of it, had Thomas not then decided to munch down on his golf ball. A few chomps in and he hurt himself, go figure, and started crying again. So yeah, don’t go telling me you’ve played crazy golf until you’ve played Ultimate Crazy Golf (our kids may be required, other kids may behave in a more normal manner).

View all posts by Karen Power